3 Lessons You Can Only Learn by Trying Something 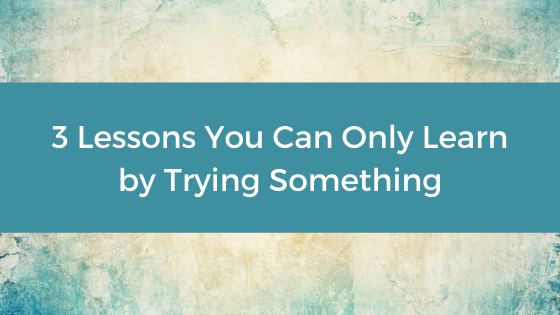 Trying new things can be one of the scariest and most rewarding experiences of your life. Sometimes, when you face a new experience, the fear can win and keep you from trying the new thing. It would be best if you didn't let this happen, though, because there are several lessons you can only learn from trying something new.

Think about your life. At one point or another, you had to try something new. Several of these experiences are what led to you being independent at some point in your life. So if you never try anything new in your life and never resolve to step out of your comfort zone, you will never learn to be independent. You also never know when you may find something that you love to do on your own!

Failure is unfortunately widespread in life, and at some point, you will probably face it. When you do, you have three options: you can wallow in self-pity and do nothing, you can try the same thing again, or you can try something new. Of course, the first two options might seem safer and like they are less work, but you will never be able to overcome your failures that way. Instead, you will stay in the same stagnant mentality you were in that caused the failure in the first place.

There are many things in life that you may deem impossible, like you climbing mount Everest for example. But remember, when you were a kid, it seemed impossible that you would be able to ride a bike or pass that math exam, and eventually, you did. The same goes for adulthood. Nothing is impossible, and you absolutely won't know that for sure until you give something you think is impossible a try. You never know when you may discover a new way to do something or a new passion that you excel at. So don't be that negative Nancy in your social circle, and always try your best to attempt new things, even if they seem impossible.

Trying something new is a scary experience, and many people shy away from it because of that. However, if you never try anything new, you will miss out on several important lessons, like how to be independent, move on from failure, and that nothing is impossible. So, even if new things seem terrifying, it's time to step out of your comfort zone and give them a shot today.

There are no comments yet. Be the first one to leave a comment!